After much consideration, I’ve decided that I’m pulling out of Me-Made-March. I still fully support the idea, and I think it’s important to wear the things I create. And I do think it’s also a good idea to follow through on the things I’ve committed to. But there’s a whole lot of stuff that’s been working against me this time. The main thing is just time. Taking the daily photos has been a total rush job, and I haven’t been at all satisfied with any of the photos or how they show the clothes I’ve made. Nor have I had the time to actually sit down and write the descriptions/post the photos, either here or in the Flickr group, since day 4. And since I’m getting more behind every day, it becomes a bigger job to catch up every day. Truth be told, I spent the weekend out of town visiting friends, and while I wore me-made things, I didn’t even have a chance to take any pictures. The other factor there is that I’m picking up my seasonal retail job again very soon, probably before the end of the week, which means that I’ll have even less time to work with. (And I actually can’t participate in MMM on the job, anyway, since I have a t-shirt uniform I’m required to wear. This was a complication back during Self-Stitched-September, too.)

I do think that part of the problem lies in the handmade portion of my wardrobe, as well. I quickly learned that having only one pair of me-made pants was a HUGE detriment while it’s still rather cool around here–better than it was, but the temperatures still haven’t topped the low 50s on a regular basis. So I’m not very inclined to pull out the skirts yet–I’m wearing a 3/4 sleeved top now and that’s kind of pushing it for my body’s ability to stay warm, at least without my jacket. (Which, incidentally, is the same jacket I already wore on one of the few days I did post in here, also worn with black pants and a different colored top. And therefore kind of boring for me to photograph again.) But anyway, since I’m basically limited them to self-made tops, and I’ve discovered that while I have a lot of handmade tops that are in great colors for transitioning into fall and wearing through the winter, after wearing those for the last 5 months, I’m less inclined to want to wear olive greens and browns and those sorts of things. I want brighter, happier colors to chase away the last of those winter blahs. And most of the stuff I have in those colors came from places like the thrift stores, and therefore don’t fit the parameters of the challenge.

So I’m giving up for this round. And I should probably feel worse about it than I do, but I feel that I learned what I needed to from this round. Which is basically that I need to work on pants and transitional/layering pieces for warmer weather. And I also need to find a way to take better/more interesting photos of myself wearing those handmade things, even though it’s so much easier to just stick them on Donna. I’m not saying I’ll never do this sort of thing again, but it’ll probably play out in more me playing around with incorporating new items into my current wardrobe and doing outfit shots of that. (I’m thinking along the lines of those “1 item 6 ways” posts that Carolyn does.) And with more limited time now, I’d rather spend what I have doing things like practicing my flute and making new stuff, rather than writing up descriptions for rushed, crappy photos of the stuff I’ve already made.

My apologies to the other MMM participants, and I hope you understand.

Along the lines of my need to conquer pants-making, I am now in possession of the Burda pattern recommended as a starting point for those Anthropologie pants, and there are 3 1/2 yards of caramel-colored linen somewhere between Fabric.com’s warehouse and my place. So it has to happen now. (Other than the color issue, I had no pieces of fabric with enough yardage that would work for pants. Though I am thinking about making the basic wide-legged pant from this pattern by squeezing it out of something in the stash, as a wearable muslin of sorts, before I attempt adding the pleats and such.)

Also, so this post isn’t completely pictureless, I do have knitting progress to show. 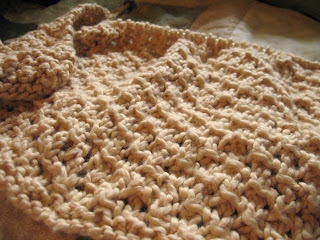 I started this before the weekend, but here’s where I’m at on the wrap now. It’s made out of some very soft organic cotton, and I’m about 1/6 of the way through–since I am trying to partially offset my fabric stash by avoiding building a yarn one, I’ve decided I’m going to ignore the instructions as far as the length goes and just basically knit until I run out of yarn. It’ll shrink up a bit lengthwise once I block it to open up the pattern anyway, more likely than not. (I think. I’ve never blocked anything, so I’m not sure.) And it’s a repetitive pattern, basically the same 4 rows over and over with 2 rows of straight up knitting on either end, so I can get away with extending the pattern quite easily.

One thought on “Bad little miss Sew and So.”