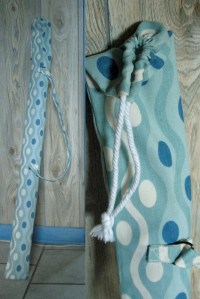 First off: The instant gratification project (with a short backstory)! My dad has had rental properties for some time now–since before I started college, I think. That was largely how my parents paid for that for both me and my brother. And while I was still in school, I’d occasionally help him out with fixing them up between tenants as my class/work schedules allowed. Mostly in terms of painting and cleaning off disgusting kitchen appliances. It’s not unusual for his tenants to leave things there– I think my brother and his wife have a chair from one of the more recent incidents of that. My best find was a beach umbrella, which was still in great condition, and which I’ve been toting with me every time I’ve gone to the beach since. (Being of mostly Anglo-Celtic-German decent, I tend to burn like a vampire in the sun. And not those sparkly poser Twilight ones, either.)

The only bad thing about the umbrella was its carrying case. It was cheap clear vinyl that had a tendency to stick to the umbrella somewhat when you stuff it back in. On the plus side, it did have a carrying strap. But that broke either last summer or the summer before, and there were just a ridiculous amount of tears in it. So I finally got around to making a new bag for it on Sunday– just in time, too, since I’m going to be going back and forth to the beach several times in this next week and a half! It was so easy to make– just basically sewing/topstitching the strap, sewing that on to the fabric, and then making a closed-end tube out of it. With the drawstring top, of course. I modeled it after the old bag, and the umbrella fits in there rather snugly, but perfectly. And the best thing was that this was all stuff I had on hand– the metal rings were in my box of random sewing thingamabobs (I think from some bag I didn’t get around to), and the drawstring was leftover stuffing cord from the piping I made for some pajamas. The fabric is one of the curtains from my old bedroom. Now I just need to figure out what to do with the leftover curtain-and-two-thirds that I still have left…

Now for my still-in-progress, anti-instant-gratification project:

This is where I’m at so far on my blouse from the May 2009 Burda. It’s going kind of slowly because I’m trying to pin really carefully in order to match up the plaids as much as possible. That, and I had to cut all of the pieces out individually to match the plaids. (And I still don’t think I got it right on the top front…I should have shifted it over a little more. Oh well.) Well, that and both of the concerts I was scheduled to go to this summer were within three days of each other, as in this past Saturday and Monday. (Both of which I thoroughly enjoyed.) I’m really excited to see how this shirt will turn out, though–given the color scheme, I’m a bit surprised at how much I’m loving this fabric. 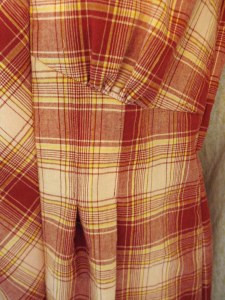 Plus this shirt has some really great details. I really like those pleats! If it turns out as well as I’m hoping, I strongly suspect that I’m going to use this pattern again.

I’m planning on working on it some more this afternoon, since the garden center has had to cut back its employees’ hours and therefore I have no work until the three lessons I teach this evening. Just have to finish up some cleaning first. And probably some more flute practicing, since the flute ensemble has a concert on Sunday, and I more or less had to sight-read all of the parts last Sunday because I got switched to other parts. But if all goes well, this should have sleeves by the end of the day!

On a final, random note, I’m seriously considering signing up for this Self-Stitched September challenge.  It’s been awhile since I’ve done anything like that, and I like that the parameters let you kind of design your own challenge. I’ve seen some people on there saying they’ll wear ONLY handmade stuff, and others who go the route of wearing at least one handmade article of clothing or accessory every day. So in that aspect, it would be a fairly stress-free challenge (and I wouldn’t have to attempt to sew a bunch of pants in less than a month, or exclude any of my favorite thrift store finds!) Much more user-friendly than, say, the Wardrobe Refashion challenge. And I kind of like seeing what other people come up with for these things. Only a couple weeks left till the fall (eep) so I guess I’d better make up my mind…

One thought on “a tale of two opposites”