…and not a finished garment to show for it! Yet.

I cut out muslins for 3 different things in my mini-wardrobe on Saturday– the jeans 2.0, my pair of shorts, and the bodice for the maxi-dress I wanted to make. (And since I had to find a knit for the dress, that means I’m using up another piece of stash! Ha!) Spent some more time on Saturday sewing the dress “muslin”, and worked on tweaking it again this morning– no band today, so I had a couple hours to sew!

And, well, I’m not sure this dress is going to be happening as originally planned. I’d already raised the neckline a bit, and the front part of the bodice fits really, really well. The midriff part had to be taken in about an inch and a half on each side (which I did after taking these pics), but I’d expected that.

Also expected was that I’d have a bit of trouble with the back, due to the elastic. (And, I’m pretty sure, reading some Pattern Review articles on it.) 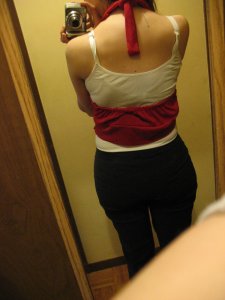 I just wasn’t expecting this much trouble…good thing I’m wearing the camisole here, because the back is definitely sagging below my bra! And this is with a mere 3 inches or so of fabric sewn to the bottom. I shudder to think of what an entire maxi-dress skirt would do. After these photos, I lopped off about an inch of the elastic (minus seams) and several inches off the back side pieces. Still was sagging. I’m really doubtful that I can modify this enough to support an entire maxi-dress skirt, even with building in a bra. So I’m thinking what I may end up doing instead is to use what’s left of the knit and the stuff I got to make the built-in bra to just turn this into a halter top. Would be good for July 4th, if it doesn’t clash with my hair too much. And then for the dress, go with a slightly more bra-friendly pattern from my stash. (I’m thinking the bottom right-hand corner with the big print view. At any rate, will make it a faster sewing job, which I kind of need right now. And though I usually don’t pay much attention to it, I think the maxi-dress trend is supposed to have passed.)

No pictures of it, but I did sew the jeans muslin 2.0 together. Took some tweaking, probably due to my slightly oddball pattern drafting (masking tape on newsprint), but I’m glad I allowed 1″ seams. Taking those down to 5/8″ made it fit just about perfectly. The yoke is still a bit off and gapping in the back (and on the sides a bit), but it’s close enough that I think I may just cut it like this and then tweak it in the actual denim so I can make it work with any additional thickness.

Also done over the weekend: Using some scraps from that muslin to finish the first section of my much-needed jewelry organizer. I’ve got 18 necklaces in it so far (9 per side), and it looks like it’s going to work pretty well. I’ll try to get pics soon.

Also also done over the weekend: I spent Friday afternoon playing with my bamboo scraps and dummy to see what I could come up with for that top. So this is what I currently have pinned to my dummy. The straps are just twisted up scraps that I pinned on to determine what sort of straps– they won’t stay that rough.

Honestly, at this point, I’m kind of torn. I like the concept of it. But there’s that tiny nagging part of my brain that wonders if wearing something that looked like this out in public would give off too much of a Tinkerbell vibe?

I guess it would also partially depend on if it would actually fit. There would be a zipper involved, but it would be hard to bring that past the waist at all with this skirt action going on…makes me wonder if I’d even be able to get it on!

So, it stays pinned to my dummy while I ponder all of this.

So I have absolutely nothing that I have to do on Sunday, other than go to church. My evening Bible study and flute orchestra rehearsals are both cancelled due to the holiday weekend. So my plan is to try and get the actual denim for the jeans cut out on Friday or Saturday (we’ll see, since I have plans for both evenings!) I’m hoping that my mom will let me borrow one of her extra machines (yes, she has more than one), and that I can find a place to set those up along with my serger so that I can just go assembly-line style–I forget whose blog I read it on (sorry!) but I remember reading something about someone who made a pair of jeans and used two machines so she could just keep the topstitching thread in one and the actual sewing thread in another and not have to keep stopping to rethread the machine. Which is pretty brilliant, I think. If I can do that, and if the fly zipper doesn’t give me too much trouble, in theory, I might be able to get these jeans done by the unofficial start of summer!