C and I finished almost the entire scrapbook yesterday! It’s a total of 58 pages, and we only have 3 left to go (movie quotes and song lyrics that we weren’t able to get written out in advance.) I also got the scrapbook covered in fabric, and I’m trying out this snaplock system that’s supposed to be more secure for large scrapbooks than those awful posts. If it works, I’m probably going to redo at least half of my scrapbooks with this. (Especially the one from college that I recently discovered that the cover fell off of because the posts tore out of it!) So far, so good, but I don’t quite trust their adhesive (since the fabric cover added a tiny bit of extra thickness that made it pop off a couple times yesterday) so I think I’m going to glue it in securely when all is said and done. There will be pictures, but not yet.

I can, however, show pictures of these. 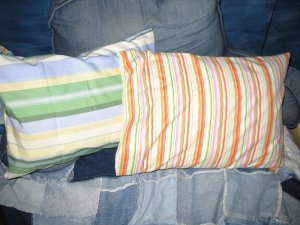 These two pillows (with pillowcases over top) were made this afternoon– see the last post for why. They came together really fast, actually, despite being two pillows and removable cases. My mom generously offered to help since I was on a time crunch (was given the fabric yesterday morning, but since C and T were over pretty much all day, and C and I spent at least 10 hours putting that album together–I’m really not exaggerating–I just didn’t get to it at all then). So I cut out the pillows and she sewed them together and stuffed them while I cut out the pillowcases. I also did the handsewing on the pillows. I was really pleased with the cases, actually, though I’m really glad I have the serger now because I was able to make the insides of them all nice and professional-looking. So I don’t have to feel bad about giving it to someone!
Because of Mom’s help, I also had time to do a little bit on the Doolittle blouse, so this is how it is so far:

I really hope the armholes are going to be ok. It seemed fine when I was trying it on in front of the mirror to get the placement for the gathering and to make sure the sides fit, but they look like they’re angled really oddly on the dummy! But this is the top of the front so far….

…and the back. Which I had to basically double the width of the dart I’d already sewn in there. The front isn’t completely done yet– I’ll still need to sew off the underneath edge once I figure out exactly where the buttons should be placed. I also did get the band for the waistband ready to sew on, but had to stop to eat dinner. And now I’d better get the pillows packed up for that Bible study!

2 thoughts on “Shirt and scrapbook progress”