I give up. Nicole’s scarf is just not working. After weaving in about three times the amount of yarn it called for in the instructions, and then stitching the one end so it’ll stay, I proceeded to try and tighten the rest of it up because there were some very unattractive bubbles in it. And, in the process, not only is the scarf now rippling in an even less attractive way on the edges, but there’s snags in the scarf that I just can’t get out, and the blasted thing is STILL gapping between rows, despite weaving yarn directly between the rows in an attempt to avoid it. So I now must admit defeat, and try and come up with a sewn one that isn’t lame. Too bad I didn’t know this before I went to Joann’s today to get stocking stuffers for my mom!

On the brighter side, I now have three of the four capes done, the three that Kathryn is giving to her niece and nephews. I can delay the one for her son a bit if need be, since he’s not even walking yet so he can’t wear it. And since I noticed my mom had a pincushion on her stocking stuffer list, I made one of those tonight too. 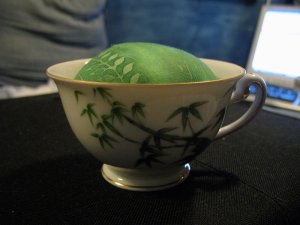 I couldn’t justify paying $10 for a stuffed tomato or whatever, so I decided while I was at Joann’s to make one. I had some time to kill between finishing up there and starting my music lessons for the day, so I went to the Salvation Army near the campus of the university that I teach at with a vague thought of maybe I could find something to base a pincushion on. My mom loves tea, as do I, and so when I found this teacup I knew it was perfect. Fifty cents for the teacup, the fabric came from an old patchwork hippie skirt of mine that I couldn’t bear to get rid of because it had such great fabric in the blocks, and used the polyester stuffing we already had. I think she’ll enjoy this much more than a tomato.